Visitation of the Virgin Mary, Feast (31 May 2019)
Zep 3.14–18a; Resp  Is 12-6; Lk 1. 39-56
Homily of Fr. Paul Panaretos, S.J., 8-day retreat
The Eternal One Rejoices
St. Ignatius of Loyola helped people inhabit scripture. He recommended: engage one of its scenes personally. Personally engaging may include: picture the place; the land; a building and rooms within. Of people: hear what they say; notice their appearance and actions. To engage the Word gently, gradually opens us to what our triune God desires us to enjoy with a scripture-scene at a particular time.

As I engaged our gospel scene Mary’s era, her location and her culture absorbed me. Imperial Rome dominated her era. Rome had annexed Mary’s homeland. Rome sought to conquer her Jewish culture in a bodily way. Her culture recognized each person’s dignity because God created all humans. Rome vested people with dignity insofar as each one served Rome’s needs: humans “reproduced…to give [Rome] control over the chain of generative life.”1 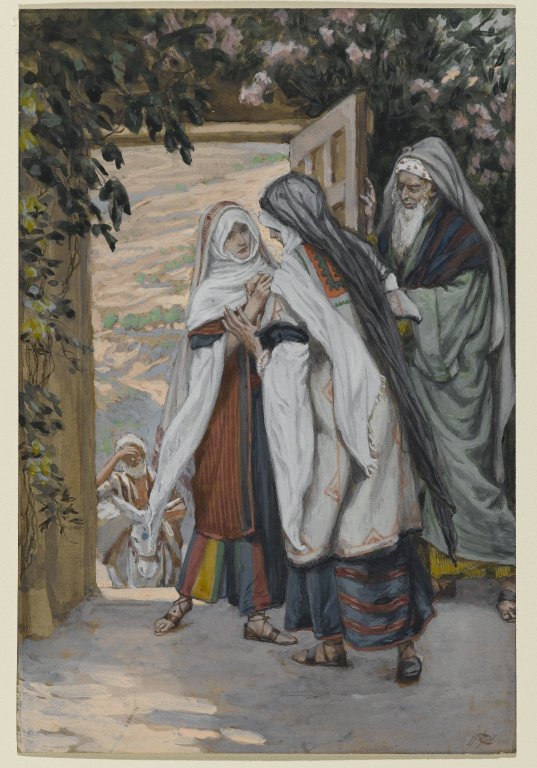 Absorbed by Mary’s Palestinian culture two things emerged: long before Mary women well knew imperial powers wanted their birthing to contribute to Roman rule in their land; second, Mary had grown to see Rome sought to dominate her motherhood—if she were so blessed.

This was innate to Jewish mothers and fathers. Yet they lived as though God’s desire for them were more real: Be glad and exult with all your heart, O daughter Jerusalem [my people]! The Eternal has removed [this foreign, imperial] judgment against you and has turned away your enemies. Prophets had announced God’s desire and not only once; each time one read them or heard them proclaimed prophetic words reminded the Eternal God is ever present. Because the Eternal had removed past judgments from their ancestors, the Eternal would do it again. The King of Israel, the Eternal, is in your midst…a mighty savior; who rejoices over you with gladness and renews you in the Eternal’s covenant love.

Mary felt this promise in her bones; she grew in it. As much as imperial Rome ignored her spiri-tual, cultural way of being in the world, God fiercely held Mary and her people and refused to let them be drowned in Rome’s way. Among you [Mary & your people] is the great and Holy One of Israel!

One day the great and Holy One of Israel visited Mary in Gabriel. On that day the Holy One refi-ned the eternal promise. Not only among but with-in you, Mary: you will conceive in your womb and give birth…to the Son of the Most High.2

Mary shivered with joy; she could not keep still! She hastened to Elizabeth despite its risk—hill country sheltered bandits and others prudent to avoid. Mary spilled her joy to Elizabeth; they rejoiced together in God my savior. What Rome tried to put down, God lifted up; Rome’s pride was about to be scattered.

The scene invited me to consider my arrogance. To eye my strengths as gifts not my doing. To feel what I identify as truly mine I share with the Holy One, kindly offering each to me from the Holy One’s generosity.

I noted the Holy One visited Mary before Mary visited Elizabeth. I did not notice chronology—Mary then Elizabeth. Rather, the Holy One visiting Mary made Mary’s visit to her cousin possible! Ask Mary to intercede for you so the ways the Eternal God has visited you on retreat frees you to reenter your daily routines in ways that are more joyful and more deeply rooted in the one who is in our midst and rejoices over us and renews us each moment. Savour the joy the Eternal God has for you.